November the most dangerous month for animal collisions

The memory of hitting an animal while driving can be hard to forget, even for a very young child. It was a sunny morning. The whole family was on a road trip, their car travelling on the inside lane of the freeway. Then, out of nowhere, an adult German shepherd crossed the road like lightening. The father driving reduced the speed but ended up hitting the animal with the edge of the front bumper. There was nothing that could be done. The dog kept running across all lanes, and no one knows what happened to it. This could have been a very serious accident, had the car crashed with other cars or overturned. It’s still a vivid memory, the child sitting in the back seat was me.

During the recent 12-month period between July of 2020 and June of 2021, similar scenes occurred an estimated 2.1 million times across U.S. roads (7.2% more than in the previous 12 months) according to an annual analysis by State Farm, the leading auto insurer in the United States.

Crashes between motor vehicles and animals happen in every state and all year long, yet the data confirms that the most dangerous months for animal collisions are November, October and December, in that order, just like in the previous 12-month period.

From a geographical perspective, the top 5 states in terms of animal collisions are: Pennsylvania (with 166,404 estimated auto insurance claims filed for the entire industry); Michigan (132,387); Texas, where the estimated total number of animal strike claims (131,373) grew 19% since the previous period; California, where the claims number involving animals (104,767) exploded by a 65% compared to the previous 12-month period; and North Carolina (98,409).

Interestingly, looking at the likelihood that drivers have of hitting an animal renders a different ranking: It turns out that West Virginia leads the nation in this type of risk (1 in 37 chance); followed by Montana, where the chances of hitting an animal (1 in 39) grew 17% since the previous period; South Dakota (1 in 48); and Michigan and Pennsylvania (both, with 1 in 54 chance).

Compare that to the District of Columbia, where it is estimated that less than 1,000 animal collisions took place during the recent 12-month period observed, and where drivers have a much lower probability of 1 in 569 of hitting an animal.

Many times animal collisions end up in road kills, and often in injuries or even the deaths of drivers and passengers. From a material perspective the damage to the vehicles can vary wildly, from a scratch or a bump to a car being completely totaled, depending on factors such as the speed at which one is driving or the size of the animal being hit. 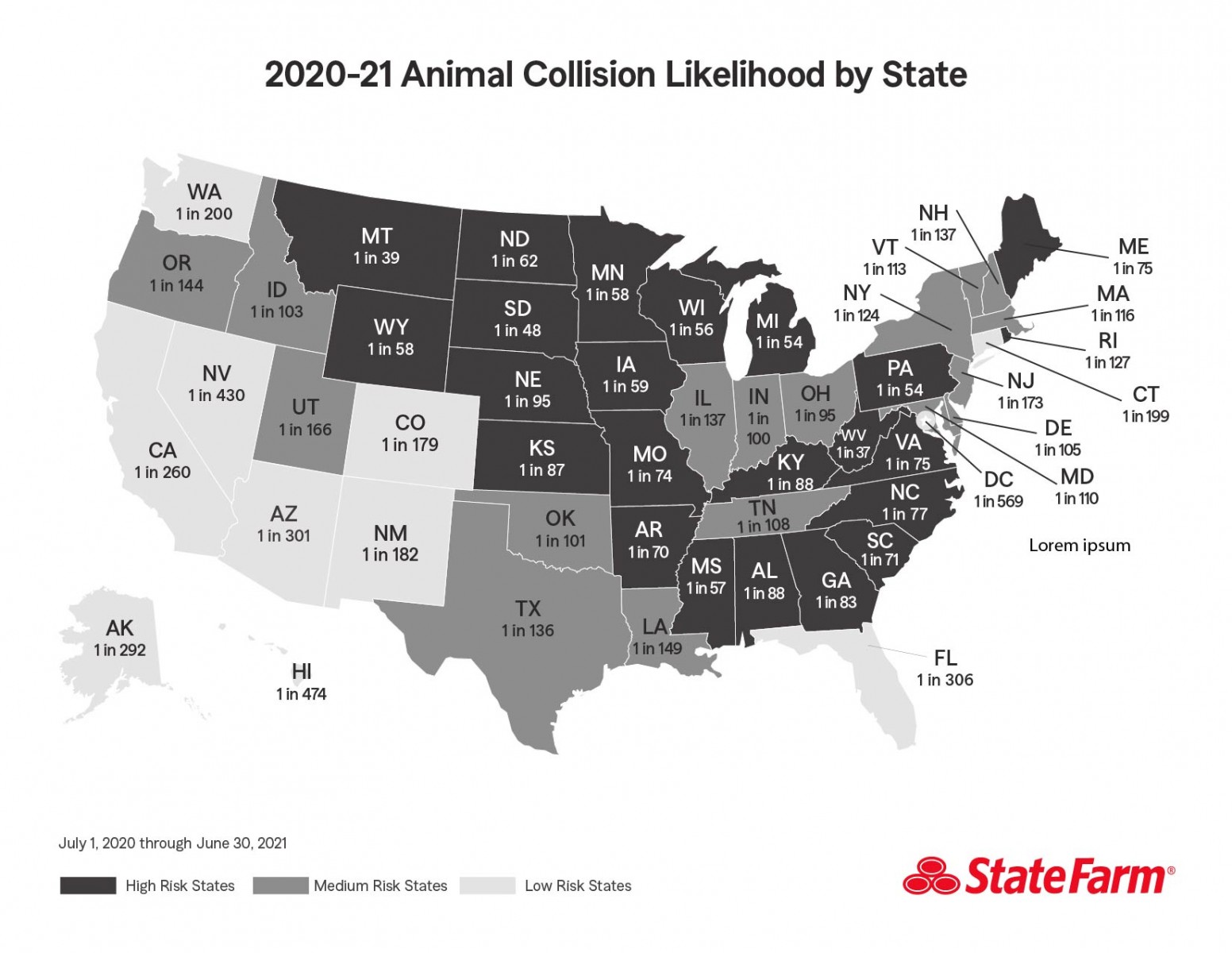 “Because many times an animal collision results in that animal’s death, this type of accident is particularly unsettling for drivers,” says Kimberly Sterling, Operations Vice President P&C Claims at State Farm. “Scanning the road while we drive, as well as slowing down, is very important, not only when driving close to wildlife, in rural areas for example, but also in our own residential neighborhoods, where pets abound.”

The range of animals involved in auto crashes is extremely diverse. Our claims database we find chickens, alligators, bats, cows, pigs, armadillos, bears, donkeys, eagles, horses, coyotes, owls, cats and dogs, and the list goes on. And then there’s the “unidentified animals” category: those that drivers were unable to identify at the time of the accidents, often because of how fast everything happened, and those for which claim specialists simply didn’t have more information. However, nationwide, in the recent 12-month period observed, more than half of the time the animal being hit was a deer (an estimated 1.4 million), followed by “unidentified animals” (189,715), rodents (110,976), dogs (92,924) and raccoons (58,020).

For the calculation of the industry claim estimates, State Farm took into account the number of animal collisions claims received, the company's market penetration (proprietary), and the number of licensed drivers in each state.

Prevent as much as you can

Speeding has been one of the most dangerous phenomenon during the Covid-19 pandemic, with the National Highway Traffic Safety Administration (NHTSA) calling 2020 the deadliest year (for humans) on highways in more than a decade. By the same token, speed could also be a factor behind the staggering animal collision statistics and the recent increase.

Here is a list of 10 tips that could help you reduce the odds of hitting an animal with your motor vehicle.

If you end up hitting an animal, take a deep breath. Make sure you and your passengers are well. Call 911 if the animal is large and still there after you hit it, and do not approach it. Once it’s safe to do so, check if your vehicle is drivable, take pictures of the damage and, if needed, file a claim.

Finally, if you had children with you in the vehicle when the crash with an animal happened, take a few moments to talk about it. Allowing emotions to be expressed, instead of suppressing them, can go a long way. Furthermore, acknowledging that driving always comes with risks may be helpful for years to come.