In the “Near Premium” market segment, the players are all the names we’ve heard of, see every day, and are essentially the well-equipped yet entry level models of the luxury brands. Acura’s TLX offers a 2.4 liter 4-cylinder, but this A-Spec example is a 3.5 liter naturally aspirated V-6 producing 290hp and this very well equipped Tech Package examples has an MSRP of $45,750.  The A-Spec trim level brings some exterior styling cues such as the distinctive grill, 19” wheels and suggestive 4” exhaust tips. Inside, the A-Spec-only red light accent stripes are a very neat detail that adds to the ambiance, especially at night.

Producing an extremely smooth 290 horsepower, downshifting several gears below 9th produced no discernible increase in vibration despite a big leap in engine rpm. What it lacks in sheer grunt it makes up for with an always welcome yet refined V-8 sound track despite lacking two cylinders. The throttle dependent rumble can help sell this car to the driver, yet isn’t an attention getting (or craving) head turner. A long travel pedal is needed to illicit downshifts, it makes for a great daily driver before even activating the numerous technology features.

While on the subject of the powertrain, one aspect must be brought up. The Super Handling All Wheel Drive (SH-AWD) absolutely spoils the driver in the rain, at green lights and even when turning. On wet roads the launch from a stop enabled by the SH-AWD will widen your eyes. Ever try flooring a car while turning and not crashing or spinning out? This thing lets you do it, one handed, easily. Thanks to the torque vectoring rear differential, overdriven by 2.7%, it absolutely spoils the driver with its capabilities and easily builds confidence. It’s quite a gem.

Four driving modes, Eco, Normal, Sport and Sport Plus control the engine and transmission, throttle input, and more. The ride is definitely on the side of luxury, more so than expected even in the A-Spec suspension trim.  Handling is extremely predictable and the tires will squeal at a limit high enough to get in trouble and gap 99% of people behind you on the on-ramp.

Even though it is a sluggish downshift response to the right foot, the 9 speed automatic is responsive with the steering wheel mounted paddle shifters. With the all-wheel drive, Acura could take advantage of the many ratios and give it much more aggressive gearing for quicker acceleration so it’s more evenly matched with some of its 6 cylinder, turbocharged competitors. But on the upper end, an 85mph cruise speed only turns a spectacularly low 1850rpm. In perspective, a diesel BMW 335d would turn 2200rpm. Great for highway fuel economy, rated at 29mpg but acceleration is non-existent if you are in the manual gear selection mode. Otherwise it simply downshifts. Could you imagine manually shifting 9 speeds in a commuter? You’d be skipping gears constantly, not reaching peak efficiency and acceleration not at the vehicle’s potential.

Multiple technical features can help a driver become either better, safer, lazier, or depending upon the mood, alternate at will. The suite of driver aids and warning systems is called AcuraWatch. Autonomous Emergency Braking (AEB) will activate the brakes in case of an imminent collision and the Forward Collision Warning (FCW) flashes “BRAKE” in orange letters between the gauges when the approach distance and speed exceeds the programmed threshold.

The Low Speed Follow (LSF), with Active Cruise Control (ACC) is a nice convenience can be quite useful in bumper to bumper traffic. The only issue is despite setting the closest distance, it leaves a large enough gap for another driver to easily move in.  It doesn’t let up on the throttle due to brake lights, but rather distance and the brake application is sudden, so you start to wonder if you’re irritating the driver behind you or if the driver in front is smooth on the throttle.

Lane Keeping Assist System (LKAS) reads the road surface and makes subtle adjustments in the steering wheel to keep the vehicle centered, a driving aid that reacts before the driver at times. Letting go of the wheel in a curve is not a good idea. And while activated, if it senses hands off the wheel for too long, it will flash a warning. What was liked the most is the Lane Departure Warning (LDW) which will flash when a car is too close for a lane change. Very helpful at highway speeds in the dark when moving around slower traffic.

The climate control system also links the seat ventilation and heating which is a great touch and the functions can be adjusted on the display screen. The seats are so comfortable, and so easy to get in and out, the Alcantara objection of being too grippy is totally dismissed in this case. The wife loved the spaciousness and how quiet it was.

There are a few quirks like the tall, wide sill, especially with the sportier lower body cladding. The rear view camera has a very wide angle but is a bit granular in image quality, especially when it rains. Speaking of rain, careful opening he trunk so you don’t spill water on the contents.


The TLX A-Spec is a solid luxury and technology contender in the market segment, an excellent daily driver, multi-state tourer, has enough grunt to get past slower traffic and makes pleasing sounds while doing it with refinement and tasteful, sporty styling touches. Add another fifty to one hundred horsepower and this would be a standout. 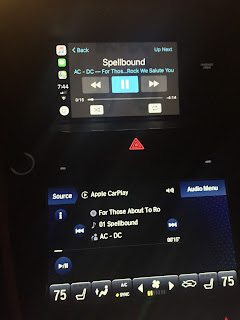 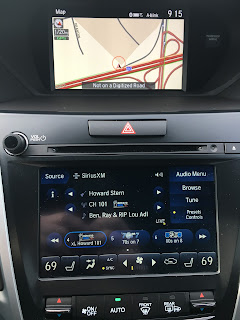 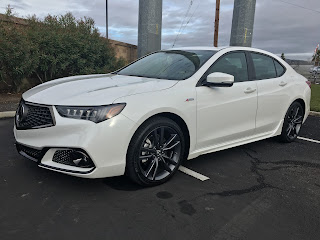 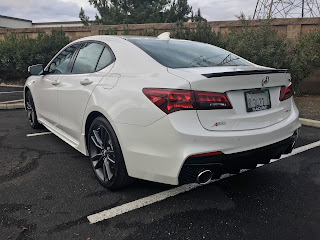