If you agree that profanity is sometimes acceptable among the right company, then the 2018 Mustang GT is just the ticket. It has a loud pedal enabled by a loud switch on the dashboard. This thing is rock-n- roll on wheels. After a joyful week with the 460hp V8, there’s lots of praise for this coupe.

First and foremost, the sound. The most common demonstration was the remote start and the explosion of rumbling, gurgling exhaust from the glorious naturally aspirated engine. Heard inside buildings, across parking lots, it was love at first sound pulse. Remote start just enhances the experience. How is this thing legal? I don’t care. This fairly loaded model with quite a few features not always found on much more expensive vehicles has an MSRP of $46,970.

The selectable exhaust has a quiet mode, but that just sounds stock. It can be programmed for certain hours because this will be heard in the neighborhood. The track and drag modes (more on those later) have an even deeper rumble. I questioned how much of it was piped into the cabin artificially, but it did set off an alarm. And it did hurt my ear with the window down during a wide open blast next to a solid object. Well ok it was an SUV. Ford does state it’s for off road use only. Oops. Here’s the deal, EVs will not have this, legal, barely legal or illegal.

Acceleration is strong, rushing past 80mph induces that giddy feeling that it’s unrelenting. Independent tests show the car to be a low 12 second, high teen car with the 10 speed automatic. Zero to 60mph would be in the high 3s at that point. It does have acceleration, braking and g-force measurements integrated into the user interface. Power is a little soft in low rpms but it comes on strong and progressively. Throttle response is very good.

The big question is how is the 10 speed automatic? It was nearly fantastic. Shifts were seamless during normal driving and it never hunted for the right gear. A steady cruising rpm, it held steady in the gear. In the track modes shifts are very firm and I got rubber going into second gear. With the shifter left in Sport and automatic modes, rapidly decelerating would induce rapid fire downshifts which was so cool.

In the manual mode double tapping the paddles due to so many ratios worked best. The only objections were a slow reaction to selecting second if while sustaining first at part throttle. Also when manually shifting near redline it was easy to hit the limiter. Otherwise this transmission was a joy. Eight miles per hour is about 2000rpm and eight-five mph is 2150rpm and about 25mpg with this 3:15 final drive ratio model. The manual recommends shifting into 10th at 60mph for optimum fuel economy.

With all this powertrain fun, I missed two turns and nearly a third driving back from the office while giggling the entire time having so much fun with the response and feedback. The suspension is firm yet compliant, and very comfortable. For street use, and spirted on-ramp duty, it was excellent. Despite the old joke about spin-outs and danger to pedestrians, the rear end grip accelerating out of turns with the 255 width rear tires was surprisingly good.

If you don’t have a heavy foot, it’s an excellent commuter. Despite the tall hood and the side mirrors being a little small, visibility is excellent along with a good and functional interior layout unlike the Camaro. The rear back-up camera view is so wide it borders on epic. While cruising, the adaptive cruise control worked extremely well, less intrusive than others recently sampled. The selectable gauge display can show air/fuel ratio, axle oil temp, boost/vacuum, cylinder head temp, inlet air temp, oil pressure, oil temp and transmission oil temp.

With the Premium package, leather seats that are both heated and cooled are standard. They really form to the body mid-back but seem to be lacking at shoulder blade and higher level. Although some higher speed turns didn’t reveal any shortcomings in function. The headrest is tilt adjustable as well. There are other clever touches like a dedicated rear seat access lever behind each seat, and a magnetic button holds the seatbelt strap in place so it’s easier to grab and better than a button.

The engine oi change interval is up to 10,000 miles, with 5w-20. However, 5w-30 is recommended for track duty, with instructions to change back to 5w-20 after. Extreme duty can bring the oil change interval down to 3,000 miles but the interval for track duty (with the viscosity switch) seems to be 7,000 miles. Keep in mind, this is a large engine physically and it takes 10 quarts of oil. You’ve got to pay to play.

The Ford Sync 3 infotainment system works well, the user interface pretty easy to figure out, not even needing to check the manual on how to operate it. Apple Car Play starts right up and supposedly Waze will be included with it soon. Although the volume only went up to 30, the Shaker subwoofer in the trunk would shake the rear window and the lower front speakers blow the hairs on your lower legs, if you’re equipped like that.

It’s a dichotomy of refinements, features and unrefinements. The side window up and down action shakes the long heavy doors, you can subtly feel the vehicle shake as well. The pony image projected on the ground by the side view mirrors is fun, but generated extreme reactions, for and against. There’s a large console behind the rear mirror, only noticed from the outside. Maybe oversized but if it included the auto dimming headlights function, it worked great. The brake pedal feels a little wooden but modulates perfectly. The steering column release is on the right side, shouldn’t they always be in center under the column?

There’s something about domestic performance cars. Not sure if it is the tall, flat hoods combined with heavy engines sitting over or near the front wheels, but Ford did a great job with this one and the soundtrack speaks volumes. The exterior styling, especially the rear, is simply brilliant and it’s the best-selling sports coupe globally. I guess you could say, all things considered, it is world class. 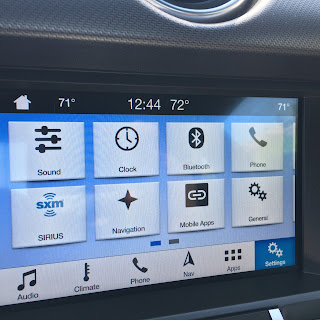 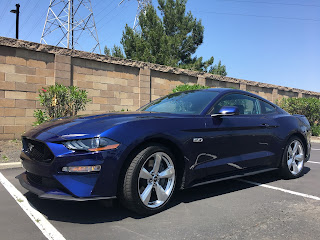 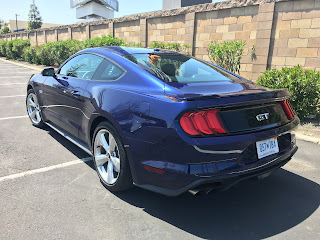 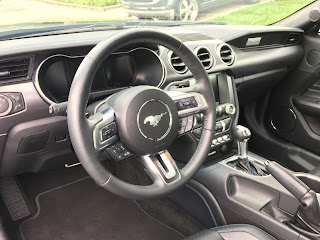 The Most Useful and Unbiased Ford Car and Truck Consumer Research Tools Anywhere!