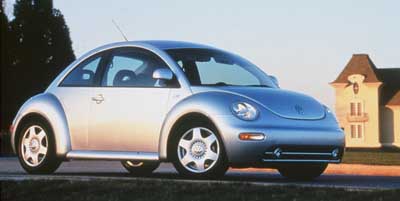 
When I first drove the Volkswagen New Beetle I fell in love. Here was a car that I originally thought was too cute and too retro, yet I wanted to buy one almost immediately.

The styling, one I got close enough to appreciate it, was extremely well done. All the pieces fit together. All the textures were carefully chosen to complement each other. The hand brake, for example, had a nice thick diameter to it that gave it the "right" feel. The same with the steering wheel.

Even the dash had a mix of textures and feels to set it apart from all the other "me too" vehicles on the road. Like its ancestor, the Original beetle, the New Beetle had a uniqueness that was not only in the physical styling, but In the total package.

Of course, the new Beetle is much better than the Original. The engine of the standard model is a 1.9-liter waster-cooled inline four that generates 90 horsepower. You could put two Original beetles together and not have that much power. Water-cooled engines are much quieter than the air-cooled type, too, making the New Beetle a pleasure to drive at high speeds on modern Interstates.

But the New Beetle still lacked an overabundance of power. While the 90 horsepower engine was nice, there was always the desire to see what the car would be like with more power. I know I sound like Tim Allen here, but a better engine would make the New Beetle almost too desirable.

Coupled to a slick five-speed manual gearbox, the new 1.8-liter turbo gives the New Beetle enough power to shock the bejeezes out of other drivers on the road. It still isn't Porsche, but when you have enough power to accelerate onto a highway and get up to highway speed quickly then you have enough power. A few times I was able to downshift and use the extra power of the turbo engine to move into a different lane that offered more possibilities than lagging about in the slower lanes. The drivers I would pass were dumfounded.

But higher speed isn't the only advantage of the turbo engine. The added power makes Interstate travel more comfortable, because you're not afraid to keep up with ambient traffic. You have just as much oomph under the hood as anyone else on the road, which is an enormous safety factor when used sensibly.

With the new engine come all the fun features of the New Beetle. There's an enormous amount of headroom for front seat passengers. There isn't as much excess headroom for rear seat passengers, but there's still enough to keep from banging your head on the roof all the time. I rode in the back a few times and found the legroom to be comfortable (not great), and the headroom to be adequate. Hiproom was enough, and with my body I need a lot of hiproom. Smaller people would have no problems.

The other advantage of the New Beetle is that it has a trunk. It's rated at a bit over 12 cubic feet, which is 12 cubic feet more than the Old Beetle. And, as with most good coupes, you can fold the rear seat backs down to double to carrying capacity.

With this new engine, I can see the New Beetle as a practical cross-country tourer. Yes, I know young people took the Old Beetle on cross-country trips, but even us Senior Citizens could enjoy trips in the new one.

The best feature of the car, though, is retained from the old car. Every one who took notice of the car when I was on the road smiled. And anything that can evoke a smile from the morning and evening commuter has to be a candidate for the Nobel Peace Prize.