What's in a name? Sometimes I have no idea. Take Seltos. What the heck does Seltos mean? What does it conjure up in your mind? Regardless of its meaning Seltos is Kia's entry-level SUV, new for the 2021 model year. Eventually we will equate Seltos with what it is, competition for other entry level SUVs.

But I don't judge a vehicle by its name, I judge it on how well it does its job and its brand reputation.

The Seltos' main rivals are the Honda HR-V and Toyota C-HR. They are all withing an inch or two of each others' size. The Seltos is 172" long on a wheelbase of 103.5". Styling is a conventional 2-box design and well proportioned. 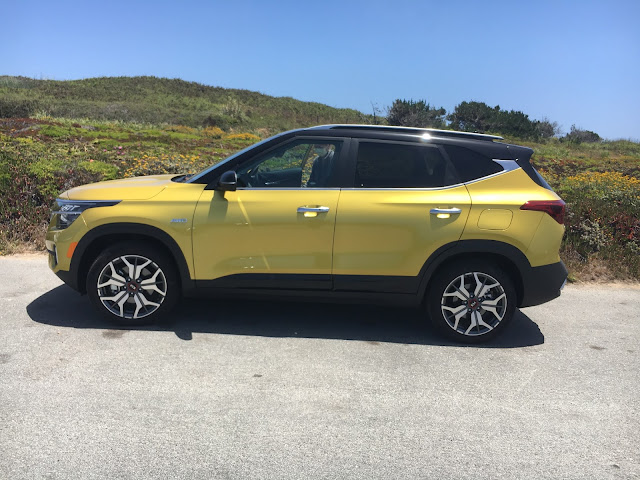 Paint color is a very subjective choice. I would not have chosen the Starbright Yellow. My wife agreed. It's kind of a mustard yellow but not quite. If I were buying a Seltos I'd opt for either of the blues - Neptune Blue or Dark Ocean Blue. Blue is my favorite color after all.

The test Seltos was a top of the line SX Turbo AWD. This of course bumps the price up but it is still reasonably priced. I, and most of you, can live without the All-Wheel-Drive (AWD) but it is standard on every model except the S (the other models are the LX, EX, S Turbo, and SX Turbo. There really doesn't seem to be a downside to AWD anymore so I won't quibble.

For a reason I'll never understand (and it's not limited to Kia) the most powerful engine, the Turbo, is the smaller engine. There is a 2.0-liter engine in some models; it makes 146 hp and 132-lb.ft. But the smaller Turbo 1.6-liter engine puts up 175 hp and 195-lb.ft. About the only reason I can think of is that if they put a turbo on the bigger engine the fuel economy would suffer.

As it is the Seltos SX Turbo is rated at 25-mpg in the city and 30 on the highway. We took a trip from Tracy to Half Moon Bay and averaged a tad over 34-mpg. This isn't the first Kia I've driven that has returned better economy than advertised.

The transmission is a 7-speed Dual Clutch automatic. Impressive name for a transmission most will never even notice. There are three transmission programs - Normal (I often think of the "Normal" by Martin Mull whenever I see that word*), Smart, and Sport. I generally left it in Smart but now and then I'd use the Sport. I felt the Seltos was a bit lazy from a stop in Smart as opposed to Sport but it was no big deal. I'm sure the fuel economy is better in Smart. 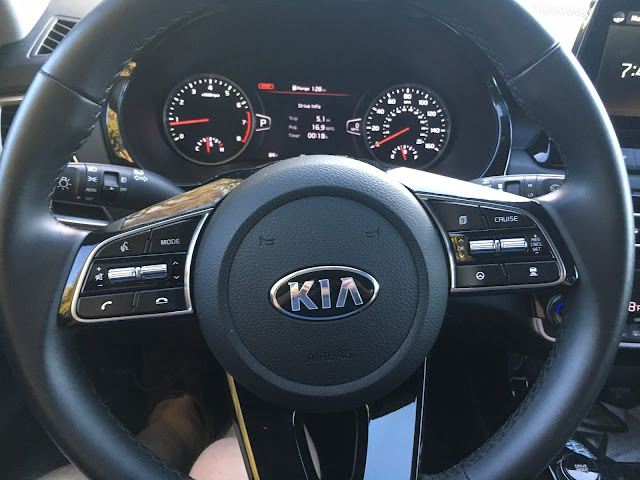 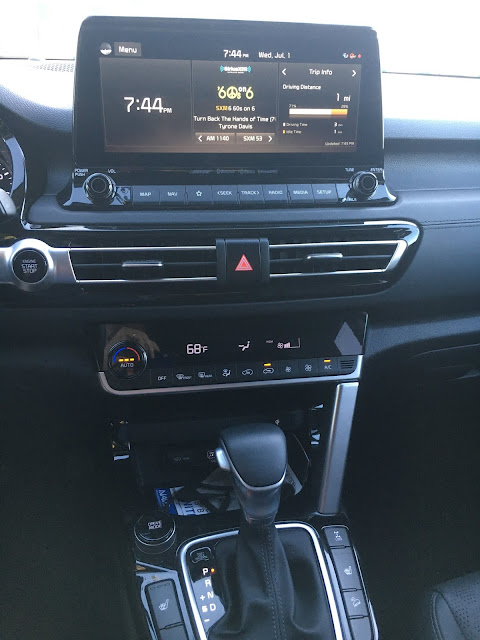 As this was the first longish drive I've taken in a while I was impressed with the Seltos. It was comfortable, agile, and roomy. I turned on all the automatic stuff, and it had a lot (most of it had been turned off). Every successive year this stuff gets better, less intrusive. Every now and then there was a little tug on the steering wheel if I let the Seltos drift too much towards the lane limits. Little warning alarms let me know if another vehicle was too close but the alarms weren't so loud that they were startling.

The Seltos is a 5-passenger vehicle; two up front and three in the rear seat. There's 26.6 cubic feet of stowage behind the rear seat and 62.8 cubic feet with the rear seat folded down. For comparison a bag that is allowed in the overhead compartment on an airplane takes up 1.736111 cubic feet. 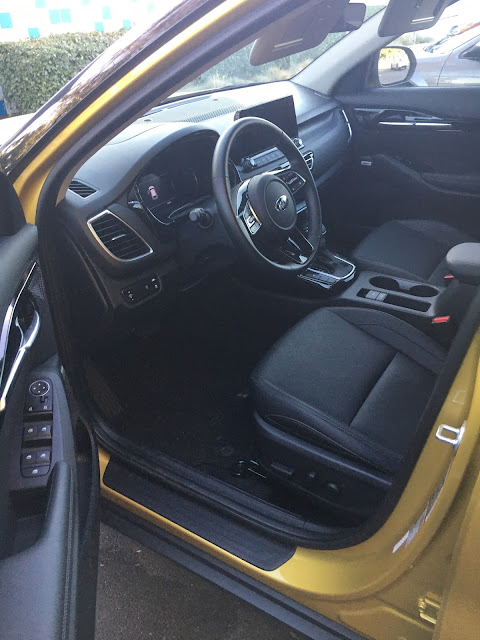 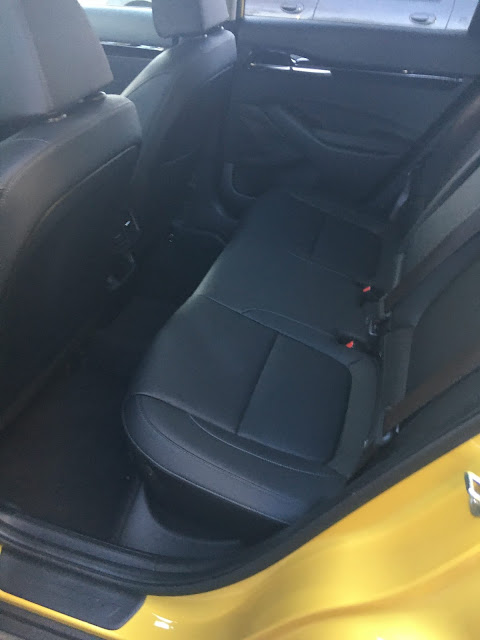 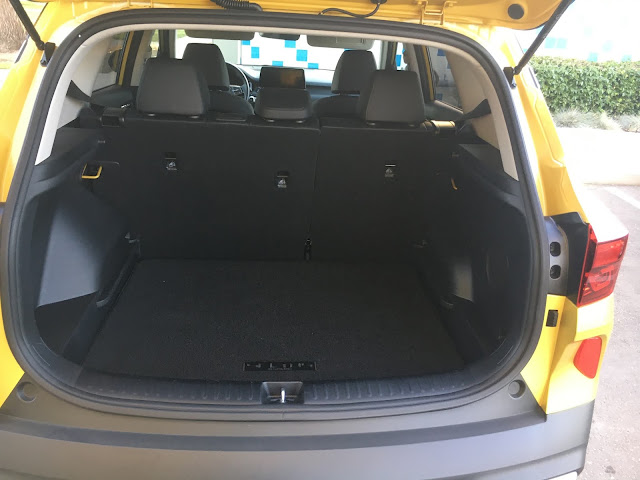 A friend asked how I liked the Seltos. I said I really liked it, that dollar for dollar the Seltos, any Kia, is an excellent choice.

The entry level SUV field is crowded and you have many choices. The Seltos did its job well; Kia's reputation is excellent. So I'd say the Kia Seltos is a worthy entry. 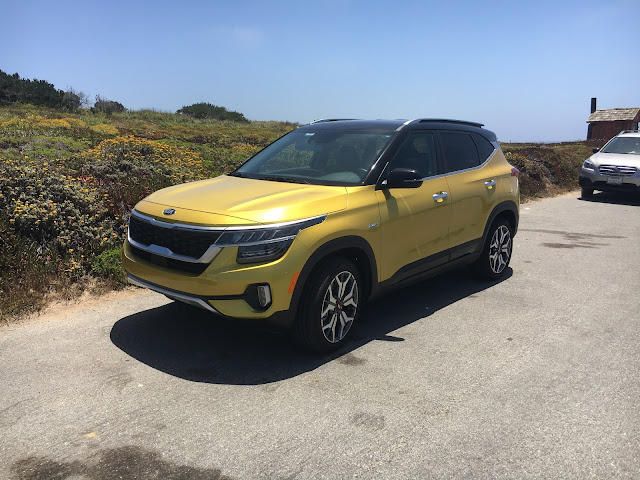 *Author's Note: I have been writing car reviews since 1984. I am a Certified Automotive Technician although I no longer ply that trade. I worked for twenty years for the California Department of Consumer Affairs & Bureau of Automotive Repair. I sat on three legislative advisory committees. I wrote an automotive column for the Tracy Press, and before that the Pacifica Tribune. I was a member of the Automotive Journalists Association of Canada and am a member of the Western Automotive Journalists.